Where Have I Been? At 39th World Chess Olympiad!

To all of my blog readers, you must've all realized that I haven't posted anything for almost a month! Well, it's not nothing happened in the past month, but rather TOO MUCH that had happened. To start off, I was away in Russia for 3 weeks to represent Canada at the 39th World Chess Olympiad held in Khanty - Mansiysk, Siberia. This was my second time representing Canada at the Olympiad, the first time being in 2008 when I was 14. However, this year I played on board 1 and took the responsibility of leading the entire women's team.

As for results, our team didn't perform exceptionally well nor exceptionally bad. We started off the tournament well but ended up around at our starting rank, being an average team. I, myself did pretty good and scored 7.5/11, finishing 27th of the 564 best female players in the world according to rating gain. Nevertheless, I was quite proud of my team because after all, we are the youngest Canadian women Olympiad team ever in history! :)

Upon my return a week and a half ago, my desk got piled up with huge stacks of homework to catch up on. Now you know why.

Anyways, something really really REALLY awesome took place yesterday at the Brookbanks branch here in Toronto but I'd like to save that story for later. Feeling the suspense yet? :)

The Olympiad reminds of why Chess in the Library ever existed. After my games, I would walk around and carefully observe all the other 150 countries. Team uniforms alone reflects how that country treats chess. Let's take a look at some pictures: 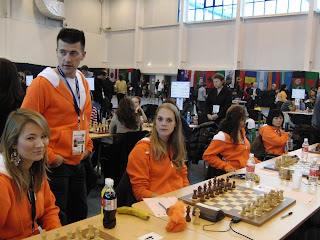 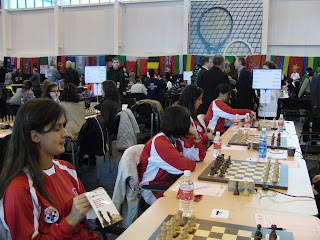 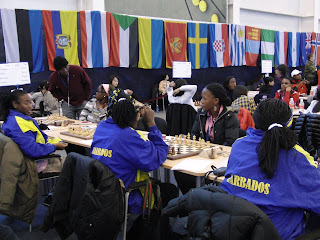 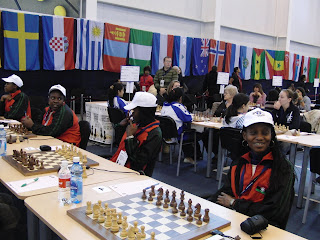 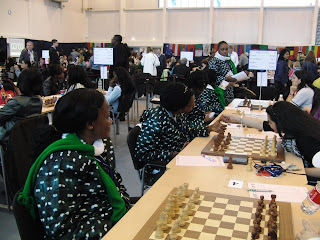 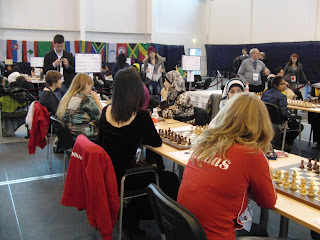 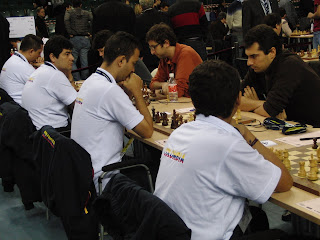 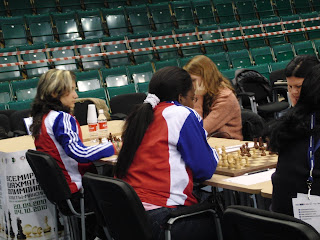 And there are only a small portion of teams that showed team spirit! If the Canadian Team goes to the Beijing Olympics with EVERYONE where a red and white uniform, then why shouldn't the Canadian Chess Olympiad team members? Both competitions are at the world's highest level so why should there be a difference? Well, it is clear from the pictures above that not all countries differentiate in attitude between the Summer Olympics and the Chess Olympiad. As for Canada, there is sure a big difference!

Team Canada at the 2010 Beijing Olympics. What a team, eh? 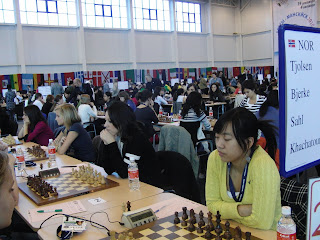 Don't get me wrong, I'm not complaining about the lack of uniforms for our chess teams (although having them would be nice), but rather reflecting upon the situation. Let's face it - chess in Canada is a lot less popular than many countries in the world, especially Europe. So why do those countries have uniforms? Because they either they've got a lot of government or corporate support. Now why would they receive such a support? Because chess is a popular game in that country and it is regarded as no different than other Olympic games. It's that simple.

Therefore, in order for Canadian chess to receive the same amount of support, we've got to make chess more and more popular here! That's exactly why I started Chess in the Library last summer - to promote chess and nothing else.
Posted by Yuanling at 9:11 AM

Chess in the Library Links

Chess in the Library in the Media

Yuanling
Toronto, Canada
Welcome to my blog! As Canada's top female chess player and the youngest ever Women International Master, it is in my best interest to spread this game to every inch of this nation. In June 2009, I founded the "Chess in the Library" program to promote chess.

Chess in the Library Locations

For details on all CITL locations, visit our website at www.chessinthelibrary.com